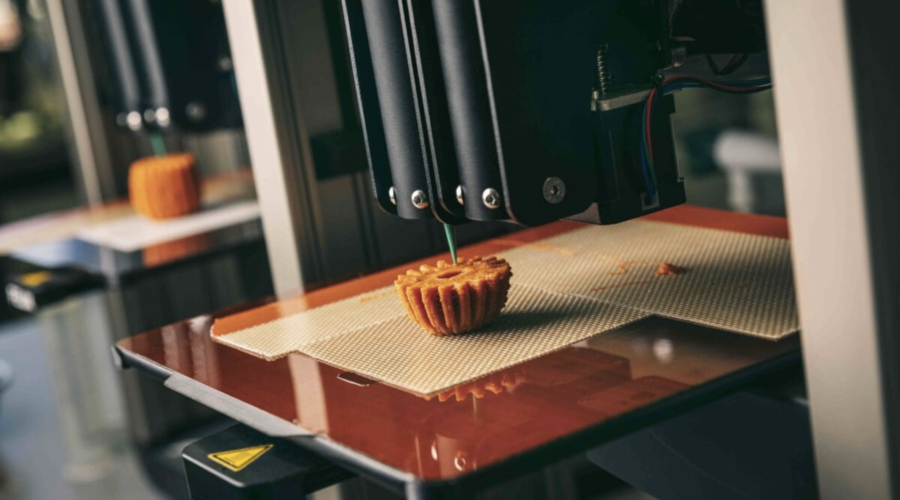 Before long, every consumer’s kitchen will have 3D food printers on its countertops — just another kitchen tool to make preparing meals (or snacks) easier and faster.

How do food printers work?

Most people know what a printer is. It prints out copies of pages you’ve put information on. That technology has been around for a long time. But a printer to make food? And what’s this about climate change? And protecting the environment?

Actually, there’s nothing all that complicated about how a 3D food printer works, at least the concept of how one works. Do you remember the pizza vending machines that popped up in 2015? In that case, the dough is prepared and extruded from one of the printer’s cartridges onto a plate. Next, the dough is topped with tomato sauce and cheese and then sent to the oven — all of this in the same machine. Think of this as a primitive 3D food printing process.

Since then, advances have been made that involve using laser technology to heat up the food — again all in the same machine. Just imagine, pushing a button on the printer for ravioli and having cooked ravioli ready to eat when you open the printer’s door.

All of this, or at least some of it, is still in the future, but the future has a way of coming faster than we imagine.

Getting down to basics, most 3D food printing is done by feeding food materials such as doughs, cheeses, frostings, and even raw meats into syringe-like containers that are then extruded from them as the nozzle is moved around “trace shapes” on a “plate” and forms layers one at a time. That’s how you get layers, such as for pizza.

Will you find this technology in a fast-food restaurant? Hardly. Instead, these printers are found in gourmet restaurants and fancy bakeries. Or you can go to special events featuring 3D food printers.

And there’s even a traveling restaurant that features not only 3D printed food but also tables, chairs, silverware and more made from 3D printing.

But what about nutrition?

In Lynette Kucsma’s TedxHigh Point talk she lets her audience know right away that she has always considered herself a healthy eater. Which is why at first she was so skeptical about foods made using 3D printing.

But as she did some research on this, she discovered that she could eat healthy when using  3D food printers. In fact, she is now the co-founder and chief marketing officer at Natural Machines, the makers of Foodini.

When describing the status of this new technology, she told her audience: “This is science fact, not science fiction.”

She goes so far as to predict that 3D printers will follow the path of microwaves. When they were first introduced in the 1970s, “people didn’t get it,” she said. Some people even thought they could cause cancer. They’d ask “why do I need one when I already have a perfectly good oven in my kitchen?” But things have changed, she said. Microwaves are now in 90 percent of our kitchens.

She predicted that 3D printers will follow the same route, but at a much faster rate simply because these days, technological advances move so fast. Before long, she said, they’ll be the size of a microwave and be a common kitchen appliance.

Turning to nutrition, she told her audience “Let’s print more of our food using fresh, healthy, real, wholesome ingredients. Let’s get away from packaged processed foods.” She pointed out that by getting away from these foods, you’ll be eating more nutritious foods instead. “And that’s healthier,” she said.

Filemon Schoffer, cofounder and CCO of Hubs.com, a 3D printing expert, said that the prices of 3D food printers vary depending on their features and audience. A precise printer that can reach high nozzle temperatures is likely to be much more expensive, he said, and more appealing to businesses.

However, for those looking to get started at home you can get a basic model for around $100 to $500. Advanced home users are likely to spend around $300 to $1,000, while commercial users who want a more sophisticated model, can expect to pay over $5,000.

He said there are many models available to purchase for home use, however it’s important to do your research before spending money on a 3D printer, as there are so many different options.

What about food safety?

No problems with food safety, say the 3D food printers’ advocates, but that’s only if the food has been prepared in a machine that’s sterile and if the preparer follows sanitary procedures. No different from what’s necessary in any kitchen.

However, in The Essential Guide to Food Safe 3D Printing: Regulations, Technologies, Materials, and More, food safety with 3D printing is not a simple matter that will boil down to a clear yes or no answer. Producing 3D printed parts for food contact items requires careful consideration of the risks depending on their intended use.

A 3D printed part can turn into a petri dish squirming with bacteria within weeks. Even though some materials will survive the dishwasher, so will dangerous bacteria such as E. coli and Salmonella that live in the little nooks and crannies. Some toxic molds find favorable growth conditions on several types of plastic and are hard to remove. Neither cleaning with bleach nor microwaving is an option for eliminating germs.

No matter what, food that is consumed by people must meet strict safety standards.

As 3D printing technology continues to soar, new research predicts the overall 3D printing market will continue to grow by 24 percent to reach $44.5 billion by 2026, according to research done by Hubs.com. As it is now, there are dozens of food printers available on the market, thanks in part to public interest and the rapid growth in the technology involved.

Filemon Schoffer, cofounder and CCO of Hubs.com, said that overall, more signs of growth in 3D printing will be seen in 2022 and beyond, thanks to enhanced automation, scalable quality controls, reduced processing costs, and further industry consolidation.

He said, key factors such as this “will help 3D printing become the robust industrial manufacturing process that befits its massive potential.”

The future of technological developments is near, and nearly everything is replaceable with machinery. During these times it can be hard to find the right professional for your Life Science Industry. Are you struggling to find the best professionals with a passion for Food (Sciences) organisation? Luckily, QTC Recruitment is specialised in finding the right candidate for the right organisation. Discover how you can be helped here!