Crops are protected by worm pheromones 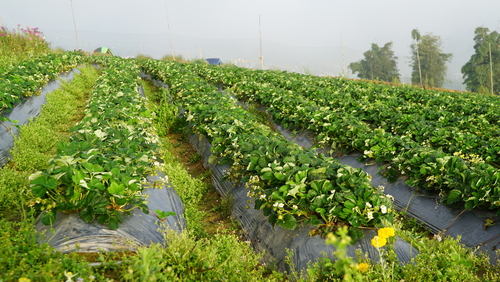 Protecting crops from pests and pathogens without using toxic pesticides has been a longtime goal of farmers. Researchers at Boyce Thompson Institute have found that compounds from an unlikely source — microscopic soil roundworms — could achieve this aim.

As described in research published in the May 2019 issue of Journal of Phytopathology, these compounds helped protect major crops from various pathogens, and thus have potential to save billions of dollars and increase agricultural sustainability around the world. Led by BTI Senior Research Associate Murli Manohar, a team around Professors Daniel Klessig and Frank Schroeder investigated the effects of a roundworm metabolite called ascr#18 on plant health. Ascr#18 is a member of the ascaroside family of pheromones, which are produced by many soil-dwelling species of roundworms for chemical communication.

The researchers treated soybean (Glycine max), rice (Oryza sativa), wheat (Triticum aestivum) and maize (Zea mays) plants with small amounts of ascr#18, and then infected the plants with a virus, bacteria, fungus or oocmycete. When examined several days later, the ascr#18-treated plants were significantly more resistant to the pathogens compared with untreated plants. “Plant roots are constantly exposed to roundworms in the soil, so it makes sense that plants have evolved to sense the pest and prime their immune systems in anticipation of being attacked,” says Schroeder.

Because they boost plants’ immune systems instead of killing pests and pathogens, ascarosides are not pesticides. As a result, they are likely to be much safer than many current means of pest and pathogen control. “Ascarosides are natural compounds that appear to be safe to plants, crops, animals, humans and the environment,” says Klessig. “I believe they could thus provide plants more environmentally friendly protection against pests and pathogens.”

In previous work, Klessig and Schroeder demonstrated that ascr#18 and other ascarosides increased resistance against pest and pathogens in tomato, potato, barley and Arabidopsis. “By expanding the work to major crops, and concentrating on their most significant pathogens, this study establishes the potential for ascarosides to enhance agriculture production worldwide,” says Klessig.

Indeed, rice is the world’s most important staple food for nearly half of the global population. Ascr#18 provided protection against Xanthomonas oryzae pv. oryzae, a bacterium that causes yield losses of 10-50% in Asian countries. Wheat is close behind rice in importance as a food staple, and ascr#18 protected it against Zymoseptoria tritici, a fungus that is one of the most severe foliar diseases of the crop.

Maize is the most widely grown grain crop throughout the Americas with great importance for food, biofuel and animal feed. Ascr#18 provided protection against Cochliobolus heterostrophus, a fungal pathogen that causes southern corn leaf blight.

Soybean is a major high-protein, oil-rich seed crop used as a food source for humans and animals. Ascr#18 protected soybeans against Phytophthora sojae, an oomycete that can kill infected plants in days, as well as the bacterial pathogen Pseudomonas syringae pv glycinea and Soybean Mosaic Virus.

Extremely small concentrations of ascarosides are sufficient to provide plants with resistance against pathogens. Interestingly, the optimal concentration appears to be dependent on the plant species and not the pathogen.

The researchers believe the reason that different plant species have different optimal dosages is likely related to the plant cell’s receptors for ascr#18. Different plant species may express different amounts of ascr#18 receptors, and receptors may have varying affinities for ascarosides. Such differences would affect the amount of ascr#18 needed to trigger the plant’s immune systems. The group is now working to determine the molecular mechanisms of how ascarosides prime the plant’s immune systems. These discoveries are being commercialized by a BTI and Cornell-based startup company, Ascribe Bioscience, as a family of crop protection products named PhytalixTM.

“This work is a great example of how the Institute is leveraging our technology through new start-up ventures, an important strategic initiative at BTI,” says Paul Debbie, BTI’s Director of New Business Development. “The Institute is proud of the opportunity to develop innovative technology in partnership with a new company that is having a positive economic impact here in our local community and for New York State.”

Published by Sciencedaily.com on July 25, 2019
Image by Shutterstock