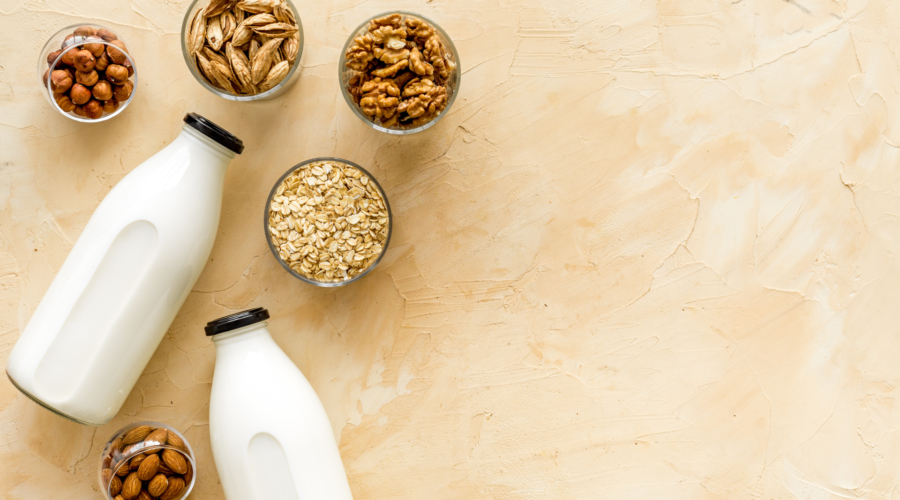 Milk alternatives contain more ingredients than just water and nuts or seeds—from different fortifications with vitamins and nutrients to some types of additives.

Plant-based milks are water-soluble extracts of legumes, oilseeds, cereals, or pseudo-cereals and are subsequently homogenised and subjected to thermal treatment, creating extracts from plants that resemble bovine milk in appearance. Many varieties are available on the market, such as oat, soy, coconut, rice, almond, hazelnut, and hemp milks, and new options are continuously appearing. Low in saturated fat, these milk alternatives contain anti-nutrients, such as phytic acid, trypsin inhibitors, and inositol phosphates that inhibit the action of some digestive enzymes but may have anti-cancer properties (e.g., phytic acid).

Having admirable nutritional value, oats are an excellent food source due to their good amino acids, fatty acids, vitamins, minerals, and dietary fibres composition as well as varieties of antioxidants. Naturally sweet and higher in carbohydrates compared to most other plant milks, oat milk is nutritious and among the few milks that can boast extra soluble fiber. Despite these benefits and others, oat milk can lead to the potential risk of allergy, sensitivities, and upset stomach resulting from high carbohydrates and sugar contents, as well as fiber not breaking down easily. Some commercially manufactured brands of oat milk are high in added sugar. Oat milk is not recommended for people with celiac disease or gluten intolerance.

Another crucial ingredient added in most oat milk to increase nutritional fats and improve the texture of the milk is oil—usually canola/rapeseed or sunflower. Rapeseed oil, which canola oil derives from, is typically high in erucic acid, which in large quantities can impair health, and particularly heart function.

Considered nutritionally closer to bovine milk and higher in protein content, soy milk is viewed as an option that can assist with cholesterol, blood pressure, and heart disease, as well as breast cancer risk reduction. Despite its essential amino acids boost, soy is a common allergen to which consumers experience intolerance or sensitivity. Another controversy linked to soy is the use of genetically modified or bioengineered varieties, which have unknown consequences. For example, in the U.S., soybeans are bioengineered to tolerate the herbicide glyphosate, which is classified as likely carcinogenic to humans.

Coconut milk is safe for most people with nut allergies. It has a light, distinctive flavor and less protein. To achieve a similar consistency to bovine milk, coconut cream is blended with water and fortified with other nutrients, such as vitamins B12, D, and A; calcium; and minerals. Squeezed from the white coconut flesh, the coconut milk has many versatile health benefits, such as raising HDL (good) cholesterol levels.

However, similar to other plant-based milk alternatives (such as rice, soy, and almond milk), coconut milk often contains added thickeners and other ingredients such as carrageenan, which is considered a potential carcinogen. Extracted from red seaweed and used in plant milks as a common additive with thickening and stabilising properties, carrageenan is linked to cancers and digestive problems, including intestinal inflammation.

Made primarily from a blend of cashews and water, cashew milk is low in calories compared to almond milk and abundant with monounsaturated fatty acids and polyunsaturated fatty acids, which are associated with reduced cardiovascular disease risk, although cashew milk is not a good source of protein. In addition, other ingredients such as calcium carbonate; vitamins E, A, and D2; salt; natural flavoring; gums; lecithin (an emulsifier); and sugar are respectively added to thicken, emulsify, and enhance flavor. It is also associated with allergies (could cause anaphylaxis), acidic pH levels, and could trigger blood sugar spikes for diabetics if too much sugar is added.

Made by soaking almonds in water and then blending and straining away the solids, almond milk is naturally lactose-free and is an excellent source of vitamin E. Despite these benefits, almond milk is lacking good protein and requires fortification with calcium and vitamins A and D.

Almond milk is not safe for people with nut allergies. Also, like coconut milk, almond milk brands available on the market contain additives like the potentially carcinogenic carrageenan to thicken and prevent separation.

Similar to other alternative milks, rice milk requires fortification with calcium and vitamin D, and it frequently contains additives to improve its consistency and shelf stability. It is supplemented with flavor enhancers, such as whole grain rice syrup and vanilla. Rice has also been shown to have elevated levels of highly toxic inorganic arsenic due to its natural ability to accumulate more arsenic. It is present in rice milk and other rice-based food items, such as rice cereals and crackers

Made from ground, soaked hemp seeds, which do not include the psychoactive component of the Cannabis sativa plant, hemp milk is high in protein. This milk is one of the few plant-based complete proteins, containing essential healthy omega-3 and omega-6 unsaturated fats. It is carbohydrate-free, which presents a good nutritional option among plant-based milks.

Despite the nutritional perks, commercial brands of hemp milk often add sweeteners—usually brown rice syrup, evaporated cane juice, or cane sugar, which adds or increases the carbohydrate content. Rarely, hemp milk can trigger allergic reactions or gastrointestinal discomfort due to the tannins and saponins found in the hemp seeds.

Taking advantage of technological advancements, scientists and manufacturers began to use genetically engineered yeast based on bovine DNA to form a protein known as a casein micelle, to produce a synthetic milk without the need for animals, feedlots, farmland, or excess greenhouse gas emissions. These proteins are then brewed, filtered, and dried, and are ready to be rehydrated and turned into animal-free dairy products.

Concocted in the lab, synthetic milk is claimed to have the same taste and nutrition as traditional milk and to still contain bovine DNA. As its flora-made proteins can be identical to those in bovine milk, people allergic to cow’s milk will also be allergic to synthetic milk. On the other hand, researchers can make the synthetic milk lactose-free and cholesterol-friendly. At present, little data is available on the safety and risks related to synthetic, lab-grown milk. Many consumers are unwilling to consume it out of fear that it may contain chemicals.

The world of milk alternatives is thriving with the large variety of options available. These options offer certain health advantages, such as reducing cholesterol or boosting antioxidant intake; however, allergies and intolerance to the new products and their ingredients should also be considered. Most food safety issues associated with alternative milks are surmountable, as long as transparency of ingredients and production processes is assured.

Are you interested in the Life Science Industry, or are you currently struggling to find an opportunity within a Food (Sciences) organisation? Luckily, our experts are specialised in finding candidates a fitting job within their field. Discover how they can help you here!