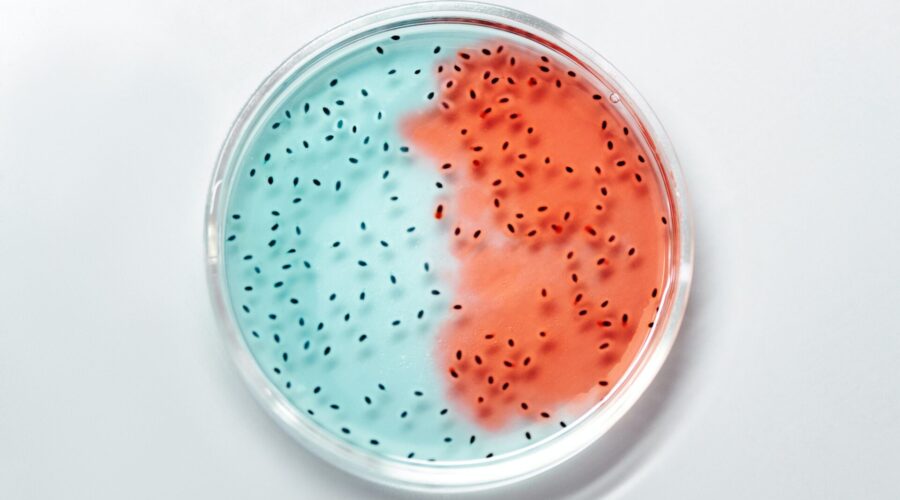 New research from scientists at UC Davis Health provides clues for how friendly bacteria in the gut —probiotics— may help eradicate bacterial pathogens like Salmonella by competing with them for needed resources.

The study, published today in Cell Host & Microbe, shows that the availability of needed nutrients alone doesn’t define where bacteria—including pathogens like Salmonella—can survive and thrive in the gut.

“These insights provide a better understanding of the nutritional basis of intestinal colonisation and can help inform efforts to develop probiotics to combat infection,” said Megan Liou, a Ph.D. candidate in the Bäumler Lab at UC Davis and the first author of the study.

Humans are limited to using oxygen—the air we breathe—to generate energy. Microbes, though, have evolved energy mechanisms that can “breathe” different compounds and elements, such as nitrates. These mechanisms allow microbes to survive in many different environments.

In the study, the researchers looked at a friendly strain of bacteria, Escherichia coli strain Nissle 1917 (E. coli), and Salmonella, a harmful strain of bacteria that can cause gastrointestinal illness in humans and animals. (Some strains of E. Coli can cause illness, but most are harmless.)

Microbes use nitrate for energy

Nitrate is best known as a food preservative, but it is also an important resource for gut microbes. The nitrate from food sources is absorbed in the small intestine. Nitrate is also available in the gut as byproduct of everyday metabolic processes. It is typically at very low levels but increases during inflammation.

Both bacteria strains in the gut use nitrate for energy. But the researchers found that Salmonella can only use nitrate generated by phagocytes, a specific type of immune cells the body sends to repair wounded or infected tissues.

The E. coli uses nitrate generated by both gut cells—epithelial tissue—and phagocytes, meaning that it can compete with the Salmonella for its energy source.

Liou compared these different sources of nitrates to different “restaurants” where the microbes can obtain the resources they need to grow.

“The ability of E. coli Nissle to dine at ‘restaurants’ generated by phagocytes and compete with the pathogen for resources was essential for the probiotic to confer protection against Salmonella,” Liou said.

When the researchers infected mice with Salmonella, it triggered the expected inflammation in the gut, resulting in immune cells—phagocytes—being brought into the intestinal lumen, the layer that lines the intestines. Salmonella was able to find a niche in the lining of the intestines rich in phagocytes and exclusively used the nitrates generated by these immune cells.

Sensors limit where Salmonella can get resources in the gut

The researchers found the answer in the sensors of Salmonellathat allow the bacteria to sniff out its surroundings and move toward a more favourable environment, known as chemotaxis receptors. They steered the pathogen away from the epithelial-derived nitrate and toward the inflammatory phagocyte cells.

Essentially, the Salmonella did not have a sensing mechanism that would steer it toward the healthy epithelial tissue, even though that tissue also created nitrates. The probiotic E. colilacks chemotaxis receptors, which allows it to occupy both niches and compete against the pathogen in the latter’s favoured environment.

“By exploring the ‘restaurants’ inside your colon, our research identifies properties of probiotics that protect us from infection,” said Andreas Bäumler, senior author of the study. Bäumler is vice-chair of research and a professor in the Department of Medical Microbiology and Immunology at the UC Davis School of Medicine. “These insights provide a better understanding of the nutritional basis of intestinal colonisation and can help inform efforts to develop probiotics to combat infection.”