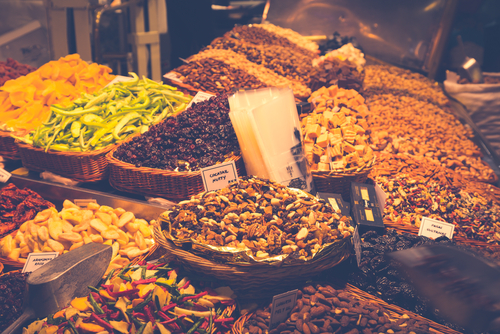 World food commodity prices declined for the third month in a row during April, as the economic and logistical impacts of the COVID-19 pandemic resulted in significant contractions in demand for many commodities. The FAO Food Price Index, which tracks international prices of the most commonly-traded food commodities, averaged 165.5 points in April, some 3.4 percent lower than the previous month and 3 percent lower than April 2019.

The FAO Vegetable Oil Price Index declined 5.2 percent in April, driven lower by falling palm, soy and rapeseed oil values. Reduced biofuel demand played a role, as did declining demand from the food sector along with higher-than-previously expected palm oil output in Malaysia and soy crushings in the United States of America.

The FAO Dairy Price Index fell by 3.6 percent, with butter and milk powder prices posting double-digit drops amid increased export availabilities, mounting inventories, weak import demand and diminished restaurant sales in the northern hemisphere. The FAO Meat Price index declined 2.7 percent. A partial recovery in import demand from China was insufficient to balance a slump in imports elsewhere, while major producing countries suffered logistical bottlenecks and a steep fall in demand from the food services sector due to shelter-at-home measures.

“The COVID-19 pandemic is hitting both the demand and supply sides for meat, as restaurant closures and reduced household incomes lead to lower consumption and labour shortages on the processing side are impacting just-in-time production systems in major livestock producing countries,” said FAO Senior Economist Upali Galketi Aratchilage.

The FAO Cereal Price Index declined only marginally, as international prices of wheat and rice rose significantly while those of maize dropped sharply. International rice prices rose by 7.2 percent from March, due in large part to temporary export restrictions by Viet Nam that were subsequently repealed, while wheat prices rose by 2.5 percent amid reports of a quick fulfilment of the export quota from the Russian Federation. Prices of coarse grains, including maize, by contrast fell by 10 percent, driven down by reduced demand for its use for both animal feed and biofuel production.

In the Cereal Supply and Demand Brief, also released today, FAO unveiled its first forecasts for global wheat supply and demand in the 2020/21 marketing season. World production is forecast at 762.6 million tonnes, broadly in line with the 2019 level, with expectations of smaller harvests in the European Union, North Africa, Ukraine and the U.S. almost offsetting larger harvests in Australia, Kazakhstan, the Russian Federation and India.

Global wheat utilisation in 2020/21 is expected to be stable, with anticipated increases in food consumption outweighing reductions in feed and industrial uses. Wheat stocks by the close of crop seasons in 2021 are forecast to rise to 274.5 million tonnes, driven by a sizeable rise foreseen in China’s inventories, while in the rest of the world global stocks are projected to decline nearly 5 percent, to their lowest level since 2013. FAO also anticipated strong maize production this year in Argentina, Brazil and South Africa, where harvesting will commence soon.

FAO maintained its worldwide production forecast for 2019 – 2 720 million tonnes – but reduced its forecast for cereal utilisation in 2019/20 by 24.7 million tonnes, largely as a result of COVID-19 impacts on economic growth, energy markets and the demand for animal feed. The new forecast mostly reflects reduced use of maize in China and the U.S.

FAO also reduced its forecast for worldwide total use of rice from last month, due partly to lowered food intake forecast for Nigeria, but overall consumption of rice is still expected to hit a new record, led by a year-on-year expansion in food intake in Asia. Wheat utilisation in 2019/20 is also expected to increase by 1.2 percent from the previous season, on anticipation of increasing food consumption.

Lower utilisation rates lead to higher world cereal stocks at the close of 2020 seasons, now pegged at 884 million tonnes, or 13.6 million tonnes above their opening levels. That would raise the global stocks-to-use ratio of cereals to 31.6 percent, thus higher than the 30.7 percent FAO projected last month. The increase in cereal stocks primarily reflects higher anticipated maize inventories, which are now expected to rise to an all-time high of 428 million tonnes.

World trade in cereals in 2019/20 is forecast to increase by 2.8 percent to 422 million tonnes, led by sorghum and wheat. Export restrictions on wheat grown in the Black Sea region have in most cases already been lifted and are not expected to affect producing countries’ full-year export commitments.

Published by fao.org on May 7, 2020
Image by Shutterstock