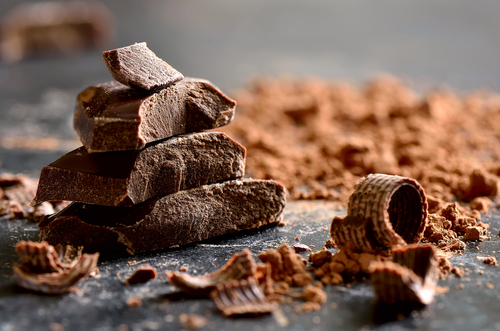 Cocoa (Theobroma cacao) is the main ingredient of chocolate, one of the most popular foods on the planet. The seeds of cocoa, also known as cocoa beans, are the only parts used for the production of chocolate. It is estimated that about nine tons of fresh byproducts — which end up as waste — are generated for each ton of cocoa beans used. Cacao byproducts that are discarded during manufacturing include the outer pod husk (cacao shell hulls and pericarp), the kernel husk and mucilage. According to research, byproducts such as these contribute to environmental pollution because they are often not properly processed or disposed of. Hence, there is a growing interest in finding a good use for these byproducts in the scientific community.

Among the many proposed applications for cacao byproducts, the possibility of using them to make nutraceuticals is the most appealing. In a recent study published in the Journal of Medicinal Food, researchers from the National Polytechnic Institute in Mexico explored the potential of a nutraceutical generated from cacao byproducts to fight obesity and regulate blood lipids. They found that rats with diet-induced obesity responded well to the nutraceutical, exhibiting reductions not only in blood cholesterol and triglycerides, but also in body weight, after five weeks of treatment.

The shell of the cocoa pod or pericarp is a rich source of protein, fats, carbohydrates, soluble and insoluble fiber, and phenols. Phenols are a class of plant compounds that possess properties beneficial to human health. In the case of cocoa phenols, a previous study by the researchers showed that these bioactive compounds possess antioxidant properties that may be useful for disease prevention.

Other studies also suggest that the flavonoids in cocoa-derived products could prevent cardiometabolic disorders, such as insulin resistance, hypertension and central adiposity. These flavonoids have the ability to decrease body weight by reducing abdominal fat, making their source a potential therapeutic alternative to conventional treatments for obesity. For their study, the Mexican researchers prepared pellets and extracts from the outer pod husk and kernel husk of cacao. They fed these products to rats with high-fat diet- and fructose-induced obesity for five weeks.

Based on these findings, the researchers concluded that cacao byproducts can be used to make nutraceuticals that improve metabolic function in obese subjects without causing adverse effects.

The health benefits of cacao

Cacao, particularly the raw, organic kind, is a bona fide superfood that offers plenty of health benefits. Besides having large amounts of antioxidants, cacao also contains theobromine, a plant compound that supports heart health, respiratory health and oral health. Cacao is also rich in minerals like copper, iron and magnesium, all of which are necessary for various bodily functions.

Here are some of the amazing benefits associated with raw, organic cacao: (h/t to SelfHacked.com)

Cacao can be consumed in the form of cacao nibs or dark chocolate. To get the full benefits of this superfood, opt for raw, organic cacao products or chocolates with a high cocoa content (at least 70 percent).

Published by foodscience.news on February 15, 2020
Image by Shutterstock