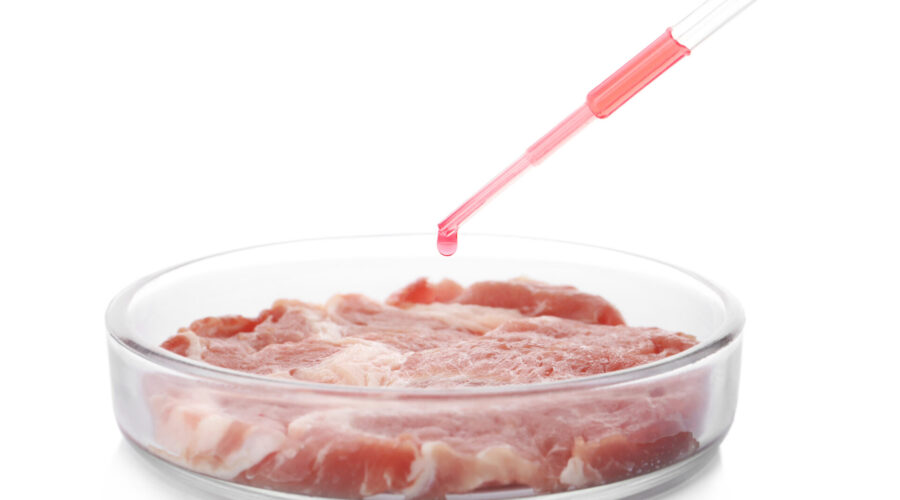 Cultivated meat is defined by growing meat products directly from its building blocks, the cells, rather than from the entire animal. Although often categorised as ‘alternative protein’, cultivated meat is an alternative to the current meat production process. Cultivated meat aims to allow the consumer to maintain the culinary and sensory qualities of the meat they have always loved, eliminating the need to remove meat as a central part of our diets.

The core concept behind this method of growing meat is the process of tissue formation, which naturally occurs in all animals during growth phases and as part of tissue regeneration throughout the lifespan. Cultivated meat replicates this process under controlled conditions. It begins by taking the cells from an animal and nurturing them in a nutrient-rich, animal-free growth medium. By changing the composition of the growth media, cells can be directed to proliferate and differentiate into cells that build muscle tissue, including myoblasts, fibroblasts, and adipocytes. Through tissue-engineering techniques and by supporting the 3D organisation of the cells, a tissue is grown to mirror traditionally produced meat.

This process consumes only a fraction of the time and resources required for conventional meat production. Conducted under closed conditions in bioreactors (cultivators), it also eliminates the need for antibiotics. Compared with conventional beef production, cultivated beef has the potential to substantially lower greenhouse gas emissions by 92%, reduce land use by 95%, and reduce water use by 78%.

Several studies have identified that familiarity with cell culture technology is a positive predictor of cultivated meat acceptance. After reading a detailed description of cultivated meat technology, most consumers were open to supporting the technology, tasting the product, purchasing it regularly, and replacing conventional meat. At the same time, about half were open to paying more.

Openness to cultivated meat increases in younger populations. Consumers envision cultivated meat to be nearly half of their total meat intake. This level of interest is remarkable for technology and new food categories that are not yet on the market.KEY FACTS:
Cultivated meat has the potential to drastically cut down the overall environmental footprint of meat production. It reduces greenhouse gas emissions by 92%, land use by 95%, and water use by 78% compared with intensive livestock farming.

Meat consumption is expected to grow by 50% in the coming decades to a market valued at US$1.8 trillion by 2040.

On a global scale, the average annual consumption of all meat is 80 kg per capita in developed countries and 27.9 kg in developing countries, with a world average of 38.7 kg per capita.

Beef is the third most-consumed meat (after pork and poultry), with a global average of 9.1 kg per capita per year.

Food insecurity increased in 2021 and has hit a 6-year high, while global poverty rose for the first time since 1998, reversing decades of progress against hunger and malnutrition.

75% of emerging infectious diseases are zoonotic, all of which have emerged in recent decades, causing tremendous challenges across the meat-production sector.

Approximately two-thirds of antibiotics considered medically necessary to humans are now being used in food animal production in the USA.

Consumption of animal-sourced protein varies between regions, cultures, and traditions, ranging from an annual intake of more than 100 kg per capita in the USA and Australia to 5 kg per capita in India.