Preserving crop diversity during a crisis 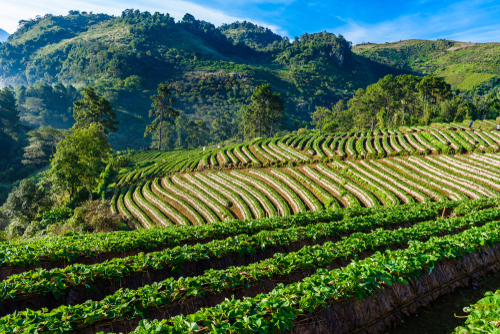 As global supply chains grapples with the COVID-19 pandemic, the safeguarding of food security is of dire concern to governmental and agri-food stakeholders. Speaking to representatives of the world’s leading seed vaults, FoodIngredientsFirst explores the role of gene banks in conserving crop diversity during times of global crises. In the past, such facilities have played an integral part in rehabilitating the loss of valuable crop species during major catastrophes – something that is heightened as the world faces this unprecedented pandemic.

Commenting on how the world’s seed vaults are preparing for COVID-19’s impact on agricultural supply, Luis Salazar, Communications Manager at the Global Crop Diversity Trust, says, “It is too early to tell whether gene banks will be so severely affected in their operations that they may lose some of their collections. If they do, they will be able to retrieve seeds from their back-up facilities, including the Svalbard Global Seed Vault.”

Before such storage facilities existed, several gene banks lost their collections to floods, fires and conflict. Since its inauguration in February 2008, the Svalbard Global Seed Vault – which lies deep inside a mountain on a remote island in the Svalbard archipelago, halfway between mainland Norway and the North Pole – has become an iconic symbol of a unique, joint effort by the global community to preserve crop diversity for future generations.

Also referred to colloquially as the “Doomsday” Seed Vault, the seed bank is managed and operated in a partnership between the Norwegian Ministry of Agriculture and Food, the Nordic Genetic Resource Centre (NordGen) and the Crop Trust.

Salazar details other critical events under which his organisation was called on for support. “When gene banks flooded in Thailand in 2011, some of the 20,000 rice accessions held there were lost forever. The Philippines’ national genebank recovered from flooding damage in 2006, only to be partially destroyed by fire in 2012. The current COVID-19 crisis poses a challenge to the operations of genebanks, and the staff working in those facilities, just as it does to so many other organizations around the world.”

Worldwide, more than 1,700 genebanks hold an estimated seven million samples of food crop diversity important for agriculture, most of them in the form of seeds. Many genebanks are national, meaning that they’re the responsibility of the country’s government. “Genebanks can also be part of international organizations, and may specialize in certain crops – like the International Maize and Wheat Improvement Center, CIMMYT (located in Mexico) for maize and wheat or the International Potato Center, CIP (located in Peru) for potatoes,” explains Salazar.

“Seed banks can also be regional, as in the case of the Pacific and the Southern African Development Community (SADC) countries, which collaborate within their respective regions on the mission of taking care of their genetic resources. Meanwhile, Nordic countries are pioneering the regional approach with NordGen,” he notes.

Detailing some of the Vault’s most interesting recent deposits, Salazar cites a recent deposit of Cherokee Nation seeds. “The seeds included in their deposit predate European settlement. They are a core part of the Cherokee identity and are culturally significant. For instance, Cherokee white eagle corn included in their shipment is the oldest maize variety they’ve cultivated and an important part of cultural activities. As another example, Cherokee candy roaster squash has hardy properties that allow it to stay fresh for over one year without refrigeration.”

The global community has committed to ending hunger by 2030 and has identified genetic diversity as an important target on the way (SDG Target 2.5). “All food production starts with a seed, whether the crop is consumed by humans or as feed to farmed animals. Major reports in recent years stress the need for genetic diversity. And there is still much work to be done. We are losing diversity in the fields due to many different reasons, including urbanisation and the expansion of the agricultural frontier. Once these materials disappear, we cannot get them back,” stresses Salazar.

“The work of genebanks is now more important than ever; they hold the diversity that our farmers and breeders need to adapt our agriculture to new and unforeseen challenges,” he concludes.

Last February, the Svalbard facility had the most recent seed deposit, which saw 36 depositors from around the world send seeds over. The next seed deposit will likely take place this summer followed by another and in October. The seed vault stores the largest global backup of seeds from food and forage crops, representing more than 5,000 species.

Safeguarding food for a millennia

The vault, located underground, is flood-, bomb- and radiation-proof, and protected by alarms and automated systems. Within the vault are deep freeze chambers to store seeds at a temperature of -20°C, using international standards.

John Dickie, Ph.D., Assistant Head of Collections Collections Department Millennium Seed Bank, details the most notable projects at his facility “We’ve helped UK organisation, Plant Life, reestablish rare and threatened species like the star fruit, from damp wet habitats in the UK from our collections. We are prioritising deepening the representation of species – we’re very concerned about the wild close relatives of domesticated crops,” he tells FoodIngredientsFirst.

The Millennium Seed Bank can house 75 percent of the world’s storable seeds and is currently home to over 2.3 billion seeds, representing over 40,000 different species.

“One of the international breeding institutes at Aleppo, Syria – largely involved in cereals – has seen a large part of its collections destroyed. Their seeds included some wild relatives and some of our collections have now gone back to help reconstruct that gene back, which is happening outside of Syria,” details Dickie.

Commenting on whether the outlook of COVID-19 necessitates the help of world seed banks, Dickie explains that it is hard to say in the short-term. “The pandemic situation has really alerted people to the kind of pressures people have been putting on the global environment and biodiversity. If we lose biodiversity, we cut off potential solutions for problems in all those particular areas in the future.”

“We’re much better equipped than we were 20 years ago, but it could always be better. There is plenty of work to do, but funding is challenging considering all the other calls for public money,” he concludes.

Published by foodingredientsfirst.com on April 13, 2020
Image by Shutterstock