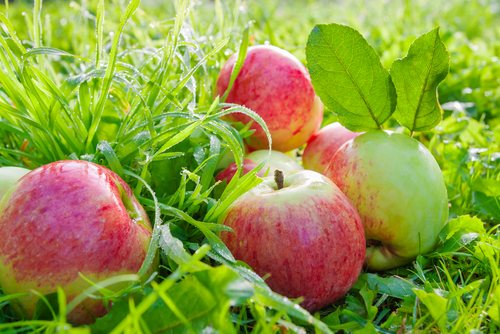 Fungal spores responsible for bitter rot disease, a common and devastating infection in fruit, do not encounter their host plants by chance. Turns out, they have a symbiotic association with the plant, often living inside its leaves. The new way of looking at the fungal pathogen, Colletotrichum fioriniae, as a leaf endophyte — bacterial or fungal microorganisms that colonize healthy plant tissue — was the outcome of a two-year study conducted by researchers in Penn State’s College of Agricultural Sciences.

According to Phillip Martin, a doctoral candidate in plant pathology, the findings, which were published recently in the journal Phytopathology, have important implications for the management of the pathogen in fruit trees.

Colletotrichum fioriniae causes diseases, often called anthracnoses, in more than 100 fruit and vegetable plants, including apple, peach, pear and strawberry. The fungus infects the fruit under warm and wet conditions and causes brown, sunken lesions; occasionally, orange spores will be seen on the surface.

The disease is of concern to the Pennsylvania apple industry, which produces 400 million to 500 million pounds of apples per year. The state ranks fourth in the nation for apple production, per statistics from the U.S. Department of Agriculture.

“The research was based on the idea that if we can determine where the spores are coming from, then maybe we can eliminate the source and break the bitter rot disease cycle,” said Martin, who carried out the study under the guidance of Kari Peter, associate research professor of tree-fruit pathology. “Unfortunately, from this perspective, many of the spores come from leaves, including apple leaves, and from trees and shrubs that are everywhere in Pennsylvania.”

Previously, the spores in question were thought to originate mostly from diseased fruits and twigs. However, even when infected fruits and twigs were removed from a tree, the disease, while reduced, often still was present, a circumstance that puzzled scientists.

The research, which took place in 2018 and 2019, focused on apples and involved the placement of rain-splash spore traps in orchards at Penn State’s Fruit Research and Extension Center, at Hollabaugh Bros. Inc. fruit and vegetable farm, and at a satellite location in Arendtsville, all of which are located in Adams County. Traps also were placed in two forested areas — comprised mostly of deciduous trees — near the orchards.

Based on previous research that indicated that Colletotrichum fioriniae could survive on leaves, the team collected more than 1,000 leaves of apple and of 24 forest plant species. The leaves were disinfected to kill fungi on the leaf surface, frozen to kill the leaves and incubated to allow the fungi inside of the leaves to grow out and sporulate.

This test found Colletotrichum fioriniae in more than 30% of leaves sampled, with most spores coming from the forest samples. In orchards that were managed with fungicides, up to 8% of apple leaves were infected with the fungus. In the untreated orchard, Martin said, the spores were abundant, meaning they were found in 15-80% of the leaves. The infections did not seem to be causing any leaf diseases, however.

“While unexpected, these findings did explain why growers struggle with bitter rot even when they remove all diseased fruits and twigs — the fungus was living in the leaves during the season,” Martin said. “The fungus was present in all the tested orchards and could not be traced to infection from a nursery, which makes sense since the initial infections likely are coming from surrounding forests and fence rows.”

Since the fungus is abundant in the forest canopy, eradication from nearby areas would be impractical, Martin added. However, the spatial limitations of rain-splash dispersal mean that forests are not regular sources of fungus spread; they likely serve only as primary introduction sources during extreme rain and wind events, after which the fungus becomes established in agricultural areas.

“Our study changes how we think about this fungus,” Martin said. “While it may not supply quick fixes, it provides the basis for further research aimed at developing better management techniques, such as selecting resistant cultivars and breeding for genetic resistance.”

Peter agreed. “Although it’s exciting to understand that Colletotrichum fiorinae’s niche in the environment is more sophisticated than we had appreciated, it does make managing bitter rot in apple orchards less straightforward,” she said. “As researchers, we can view this is an opportunity to think outside the box and to be creative in figuring out a sustainable bitter rot management strategy.”

In the meantime, Martin noted, disease-management tactics stay the same. “We don’t believe most spores are overwintering in the leaves,” he said. “Growers should continue to remove the infected fruits and twigs to help reduce disease spread season to season.”

Published by Sciencedaily.com
Image by Shutterstock