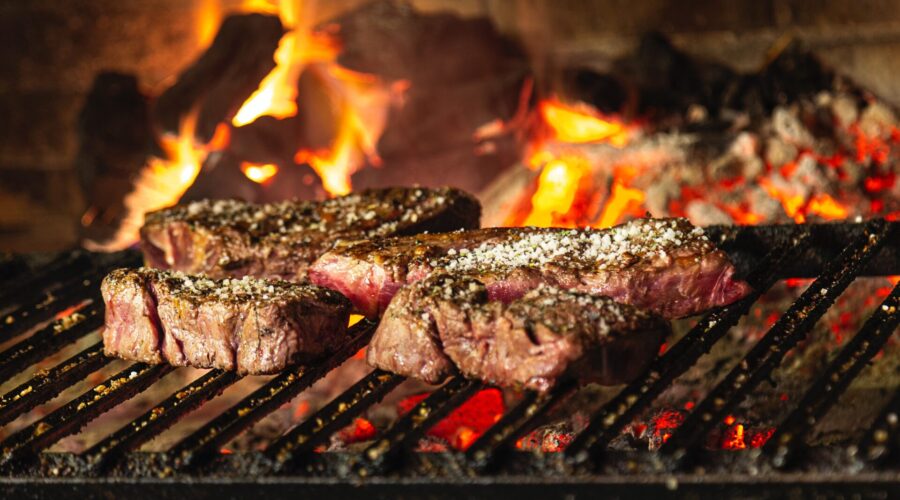 Lisa Dyson and John Reed, the former a physicist and the latter a materials scientist, were working together at the Department of Energy’s Berkeley Lab and had a common goal: They wanted to help curb climate change, and they knew one way to do that was to look at the food on our plates, such as steaks.

Agriculture is responsible for a quarter of annual greenhouse gas emissions—more than the entire transportation sector—and the meat industry produces the most emissions. Despite that, people keep gorging on meat: Global meat consumption is around 350 million tonnes a year (roughly 386 million tons) and rising. By 2050, the global population is estimated to balloon to a massive 10 billion people, meaning we need to find alternative proteins to feed all those extra mouths.

But the pair hadn’t quite settled on how to do this until one day they came across some forgotten NASA research from the 1960s. One document from 1967 explored ways of feeding astronauts on a long space journey, where there would be few resources. One of the ideas was to combine microbes with the carbon dioxide astronauts were breathing out in order to make food. Since the space program never made it to Mars, the idea had never been fully fleshed out. Dyson and Reed decided to take the concept and run with it. “We picked up where they left off,” says Dyson. In 2008, this decades-old concept inspired Dyson and Reid to found Kiverdi, which uses recycled carbon dioxide to make products like microbe-based alternatives to palm oil and citrus oil.

In 2019, they spun off Air Protein, a California-based startup that aims to make meat out of thin air. That’s where Air Protein comes in. The company is taking carbon dioxide—the pernicious greenhouse gas warming our planet—and transforming it into a juicy steak or a delicate salmon fillet. The process is similar to how yoghurt is made, relying on live cultures. Air Protein cultivates hydrogenotrophic microbes inside fermentation tanks and feeds them a mix of carbon dioxide, oxygen, minerals, water, and nitrogen. The end result is a protein-rich flour, which has a similar amino acid profile as meat protein. But how does the company turn that into a tender chicken breast? “We just add culinary techniques that give you the different textures that you’re looking for,” says Dyson—using a combination of pressure, temperature, and cooking techniques.

The technology’s climate-saving potential is twofold. First, the process itself is carbon-negative, as it uses carbon dioxide to make the protein, and Air Protein aims to eventually pull carbon dioxide from the atmosphere through direct-air capture plants. Second, the process uses 1.5 million times less land than beef and reduces water usage 15,000 times compared to beef.

The most crucial part is making the process cost-competitive with the meat industry, as well as with other meat alternatives, like soy and mycoprotein. Dyson points out that the company’s technology doesn’t require any land, uses minimal resources, and relies on renewable energies, which are getting cheaper all the time. “Our technology will enable us to not only be cost-effective from the beginning, but also to have a cost structure that continues to go down.” And the startup has garnered the attention of funders: At the beginning of 2021, it raised over $30 million in funding from investors including ADM Ventures, Barclays and GV. “We’re trying to redefine how meat is made,” says Dyson. “I’m excited to be a part of that movement.”