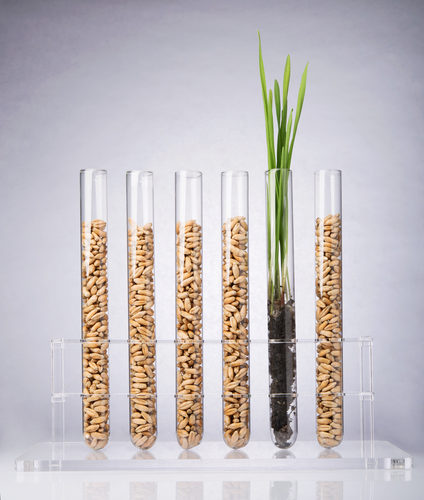 One to two per cent of the population has Coeliac Disease (CD), an immune reaction to gluten. Wheat grains contain gluten, a mixture of glutenin and gliadin proteins, which build a network that gives wheat bread its unique properties and quality. Most gliadins and part of the glutenins contain immunogenic epitopes, which are the actual trigger of the immune reaction. A gluten-free diet, excluding wheat, barley and rye, is currently the only remedy for coeliac patients.

This diet is not easy to adhere to, partly because wheat gluten is added to many processed food products for their viscoelastic properties. In addition, gluten-free products typically require the inclusion of numerous additives to adjust their texture and taste, resulting in products that are often less healthy than gluten-based equivalents, and more expensive. Thus there is a need to develop healthier food products for coeliac patients.

One can now use CRISPR/Cas to remove all gluten genes, which would produce a gluten-free wheat which is interesting for many people who want to eat gluten-free, but it would have an inferior baking quality.

In her PhD thesis, Aurélie Jouanin also describes an alternative use of gene editing with CRISPR/Cas9 to precisely modify gliadin genes and strip them of immunogenic epitopes, to develop wheat with safe gluten. As a proof of principle she generated wheat plants in which some gliadin genes were modified or removed.

These edited wheat plants are not yet safe for CD patients, as there is a large number of gluten genes present in wheat and not all gluten genes have been targeted. She has therefore also developed high-throughput methods to determine which genes have been modified and which remain to be edited in future steps towards a safe wheat variety.

Regulation of CRISPR/Cas in Europe

The former is being exempted from GM regulation while the latter is being subjected to GM regulation, following the ruling of the European Court of Justice in July 2018.
She advises the European Commission to review its position on the matter and to regulate gene editing based on scientific evidence regarding the generated products, and on the innovation principle as part of responsible research innovation initiatives.

The requirement for producing and processing these varieties are touched upon. New test methods for food products need to be developed, since the current gluten-free tests will not be able to distinguish gluten stripped of immunogenic epitopes from regular gluten.

An extreme improvement of the quality of life

Bianca Rootsaert, Managing Director of the Nederlandse Coeliakie Vereniging; “Many products are excluded from a normal healthy diet when suffering from Coeliac Disease. Coeliacs are struggling on a daily basis with the issue what they can or cannot eat. Gluten-free wheat would be an extreme improvement of the quality of life of coeliacs. It will however be important for coeliacs to distinguish gluten-free wheat from ‘normal’ wheat, which will lead to stricter regulation of food packaging and ingredient information”.